Inkerwoven Interrupted: art in the pandemic

In December 2019 we launched Inkerwoven at the Dyehouse Gallery at Bradford School of Art. Members’ work was on show; there were drop-in taster workshops in drypoint and embossing; the press and the Lord Mayor were in attendance. It was a hugely successful event with an attendance of around 300 guests. 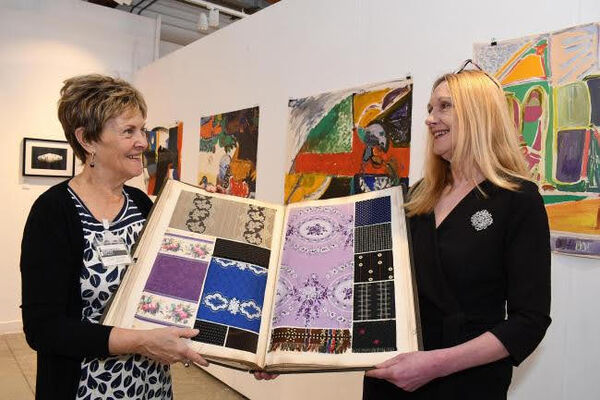 A brochure detailing the entire programme, concluding with a major exhibition at the Dyehouse in October 2020-March 2021 was distributed. It included 14 printmaking workshops for students and communities and 3 work-in-progress exhibitions over 15 months. It was very exciting. We were on our way! 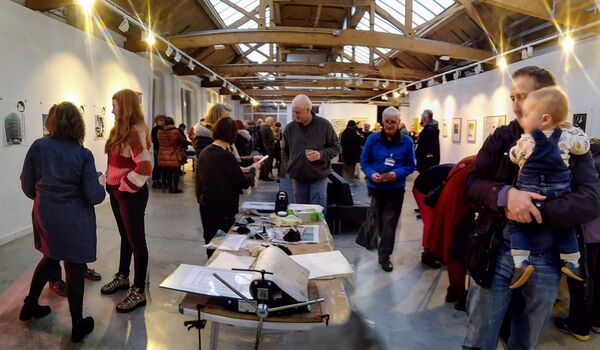 We had spent time and money on publicising the programme and, as 2020 opened, the community workshops started to fill up. In January and February there were two Monotype sessions at Artworks in Halifax with Annie and Sue and a day of embossing at the Dye House itself run by Emily and Paul. Feedback was fantastic, and places for the rest of the year filled up. 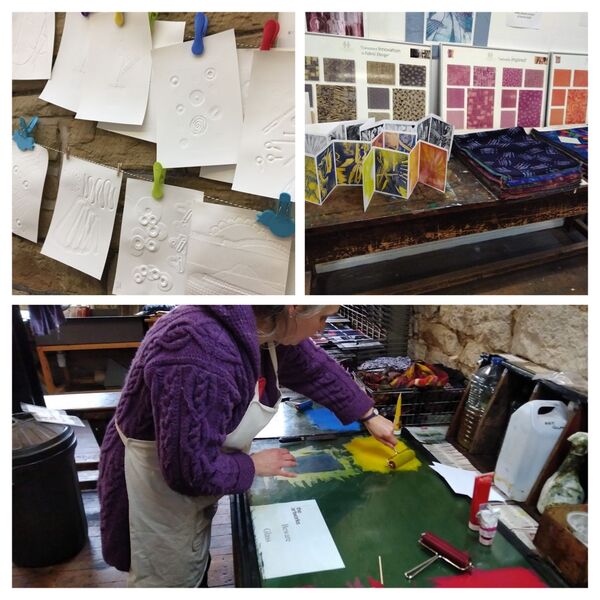 There were development workshops for Inkers members too, tailor made for us by textile artist Hannah Lamb, which all of us enjoyed. 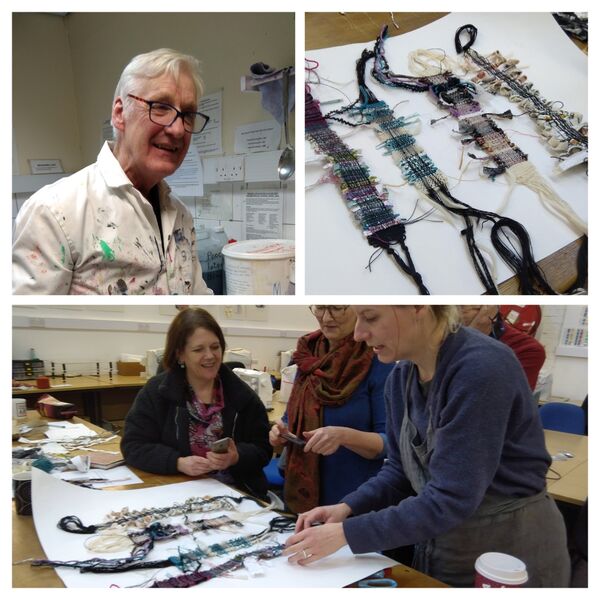 And of course, members began to make individual and group visits to the Archive to research its treasures and start to develop work in response, with the help of curator Helen Farrar. 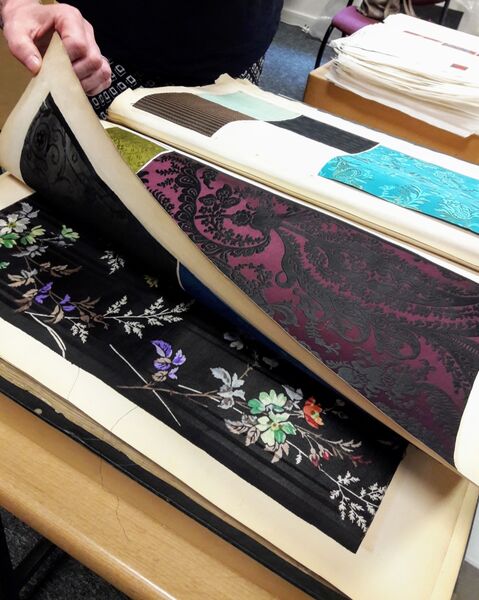 We set up our first work-progress exhibition at Colne Valley Museum in Golcar on 8th March, with an associated block printing workshop by Sammy and Jenny on the weekend of 15/16 March. 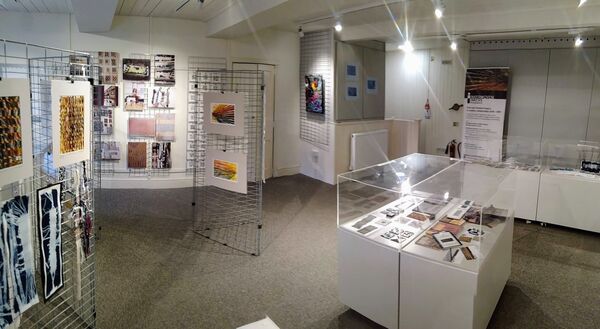 And then everything shut down.

The first lockdown was tough, but the feeling everyone had was that it would be a temporary glitch in reality, so we set about restructuring the timetable on the assumption that things wouldbe back to normal in a couple of months, and that we could work round it.

So, during the summer of 2020, as lockdown eased, we masked up, found COVID- manageable venues, and succeeded in delivering almost all our planned events, albeit in a slightly different way, even the second work-in-progress show at South Square Centre in Thornton, which was redesigned to be viewed through its large windows. 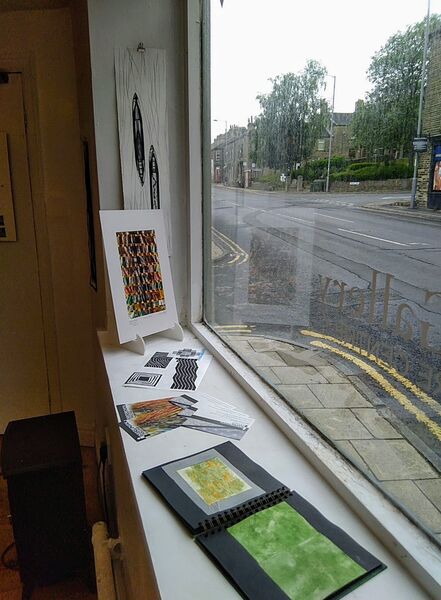 .
South Square Centre was also helpful in offering flexible space which the larger municipal venues were no longer able to provide, and gave us the run of the place for Monoprinting sessions with Annie and Sue and an Experimental Drawing day with Shelley. 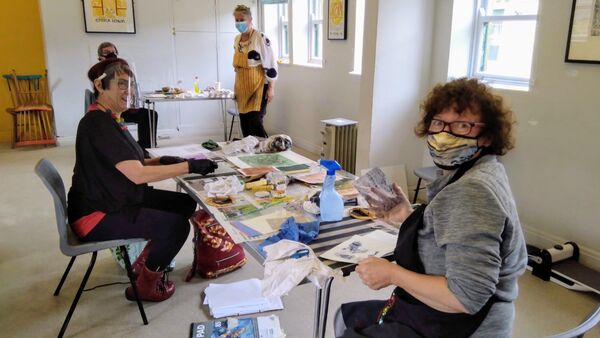 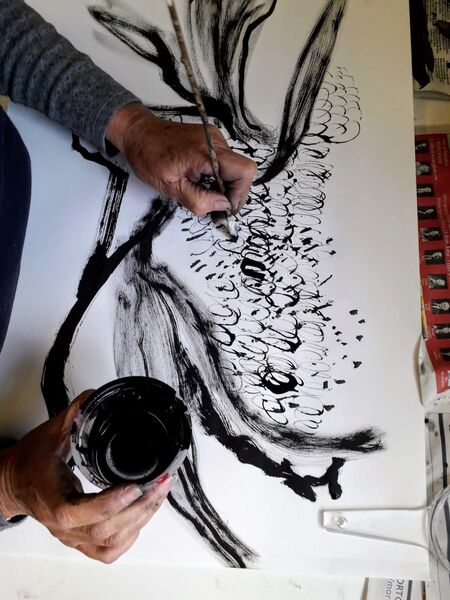 Later, in the autumn, Ruth and Paul ran rescheduled Print and Collage workshops from Ruth’s own enormous pop-up studios in Bradford City Centre. 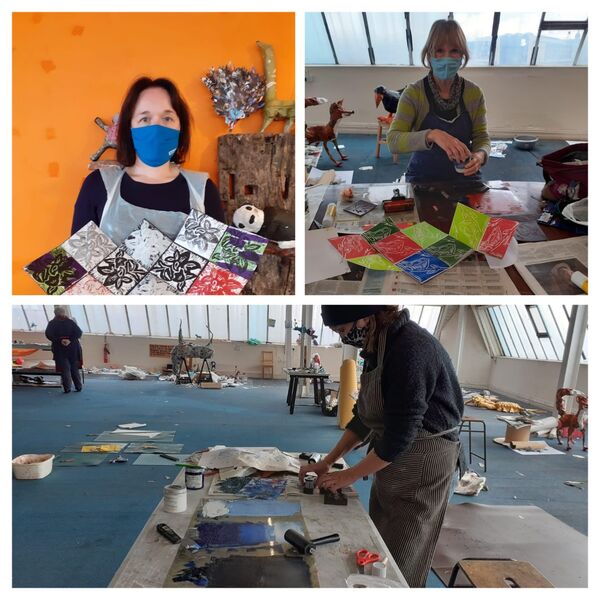 By then we were feeling we’d succeeded in navigating a fiendishly difficult year. Bradford College, being an educational establishment, was still open and so, even though access was limited, it was still possible to visit the Archive and Gallery. We’d decided to shorten our final show to give members more time to make work for it, and to run it for just 3 months, Jan-March 2021

During the same period, scheduled for March, but delayed till August, we’d also managed a successful response exhibition at the Ropewalk Gallery in Hull; Twists and Turns. As the Dye House Gallery was still ours for the 2020 autumn term, we moved Twists and Turns there as soon as it came down at the Ropewalk. It was well received by staff, students, and the few visitors who booked. 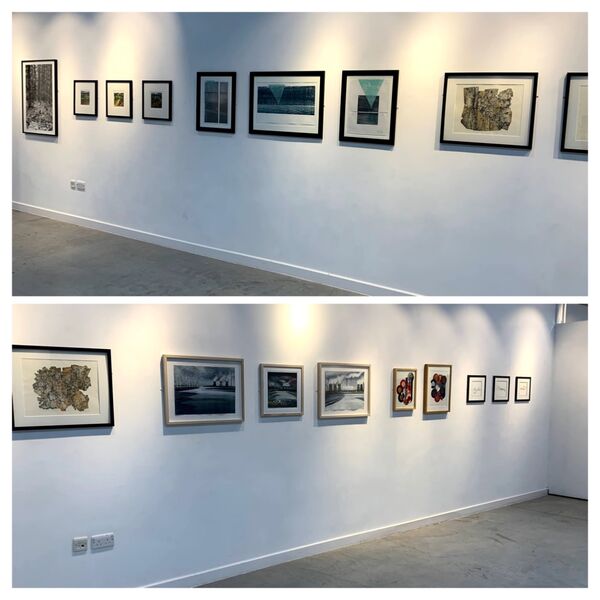 We pencilled in a date for the January opening of Inkerwoven and, by the end of November, all our work was framed and wrapped, ready to go.

And then ... the world closed down again.

This time there was no way we could recalibrate to stay within our project time limit. There wasn’t another slot available at the gallery until October 22 - March 23!

The Arts Council and Bradford MDC generously agreed to allow an extension to project funding, which was a relief. But we were now faced with a long gap. The work made and ready to hang, but in storage for 18 months. Click on the image below to view the catalogue

So we decided to go ahead and produce our Exhibition Catalogue, initially in digital form, just to keep the idea alive, if cryogenically frozen, until 2022, when we’ll kick of a new workshop programme in advance of the show. By then, we hope it will be able to open fully. See you soon!!
Next
Previous